Commissioned upon graduating from West Point in 1959, Pete’s first three years, while technically on active duty, were spent as a full-time student in England at Oxford University. In the fall of 1962, having completed his tenure as a Rhodes Scholar, Pete returned to the United States to begin his military career in earnest.

After finishing Infantry, Parachute and Ranger training, Pete was posted to the 82nd Airborne Division where he commanded a Rifle Company.

Following further training, including Vietnamese language school, Pete was deployed to Vietnam as Senior Advisor to the Vietnamese 1st Airborne Battalion, and subsequently worked in the Pacification Program.

The final decade of Pete’s military career witnessed a series of commands toward becoming a General Officer, including: a Battalion in Korea, a Brigade at Fort Ord, followed by assignment as Assistant Division Commander of the 7th Infantry Division. Then, Pete was selected to command the 3rd Brigade (“War Eagle” Brigade) in the 101st Airborne Division (Air Assault), followed by assignment as the Division Chief of Staff.

After his promotion to Brigadier General, Pete’s final posting was in the Pentagon as the Army’s Deputy Director of Strategy, Plans and Policy. 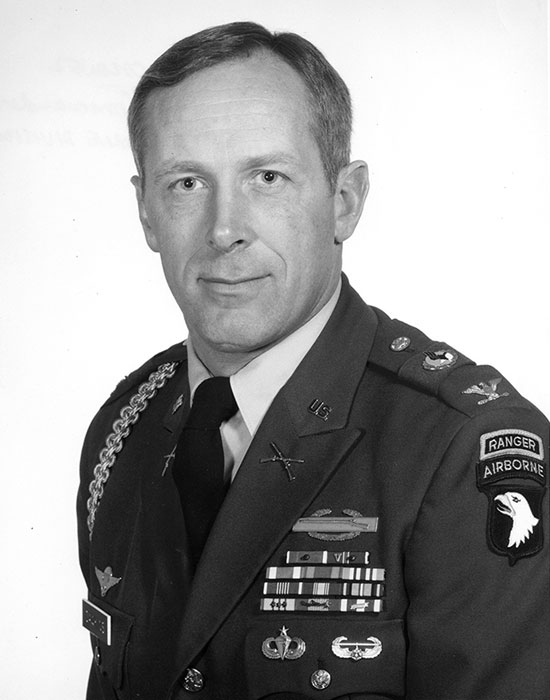 We have stood in awe of this man. But a triumph more enduring promoted him to this singular position: specifically, pete firmly gripped our hands in deep and understanding friendship. Consequently, never was a task given him not successfully accomplished; for as he cared, so also did we. We were not completely sagacious, be we knew a great friend, a great leader, a great man.

Office of the Chief of Staff of the Army

Office of the Chief of Staff of the Army (OCSA) The Pentagon, Washington, DC

Broadened the understanding of subtle distortions in the Army’s Officer Efficiency Report process. Contributed to an overhaul of the OER system.

Encouraged a major change in how Army officers were taught tactics and operations.

Strategy document presented to Gen. Westmoreland, that recommended a dramatic change in the tactical approach in VN, built around concentrating offensive operations at nighttime.

As a member of the team tasked to guide the transition from a draft based to a “volunteer” Army, Pete championed markedly raising standards, rather than relaxing them (which was the conventional wisdom of the time) in order to attract and retain highly qualified soldiers.

“The U.S. Army and the ‘Other’ War in Vietnam. A Study of the Complexity of Implementing Organizational Change”

A thorough, 18-month analysis (leading a panel of CEO’s) of opportunities to import proven private sector competencies in order to dramatically increase Department of Defense effectiveness while, at the same time, achieving major cost savings and budget reductions.

A thorough, 18-month analysis (leading a panel of CEO’s) of opportunities to import proven private sector competencies in order to dramatically increase Department of Defense effectiveness while, at the same time, achieving major cost savings and budget reductions.